This week, Sue finds out how our favourite comfort food fares on the health-o-meter. Clue: not very well. A seasoned cook at a busy mamak restaurant scraping and tossing a wok of curly noodles is a familiar scene in KL. Many of these cooks measure their pride in the dish which takes topmost precedence on the Malaysian food pedestal – Maggi goreng.

Maggi goreng involves the mere action of frying instant Maggi noodles before a packet of seasoning is added. It may not be the most nutritious of dishes –the only fresh item on a typical plate is a cut of lime. But all health consciousness is thrown out the door when one is presented with a plate, particularly if the time reads 3am. The score of sour from the lime against the deep saltiness of noodles is a great joy, only enhanced by an oozing egg served sunny side up.

Take a look at the nutrition information on the back of a noodle packet, however, and you may just pause before your next order. A packet of Maggi goreng contains 330 calories and the addition of oil, fried egg and salt elevates the number to 470, almost a fourth of an adult’s recommended daily intake. According to Shanaz F.H. Mawji, clinical dietician at Subang Jaya Medical Centre, fat is one of the main components of the noodles.“They are almost always 40 to 50 percent fat, because they’re nothing but flour stuck together with oil, plus some flavouring,” she tells me. Shanaz adds that Malaysia is ranked 13th in the world for amount of instant noodles consumed in a year.

The Malaysian Council for Obesity Prevention has reported that 20.7 percent of Malaysian adults are overweight and a further 5.8 percent are obese. In light of these statistics, I can’t help but wonder whether the people dishing up Maggi goreng are aware of its health implications. Apparently not, I soon discover. I visit Restoran J.M.T. Maju, a popular mamak restaurant, where Mohamed Mohaidul Baksi has been whipping up Maggi for three years now. When I ask him about the health implications of the dish, he just shrugs and darts his eyes elsewhere to avoid my asking of further questions. Other cooks point out that maggi goreng does at least usually contain vegetables. At Restoran Taufiq Maju, the cook Syedrasul tells me he adds cabbage, mustard greens, carrot, tauhu and white onion to balance out the noodles and oil. As a vegetarian who treats himself to the dish twice a week, he tells me that Maggi goreng is okay to consume if cooked in a wholesome manner. Meanwhile, newly-opened Bangsar cafe Wondermama serves a variation of Maggi goreng, replacing the MSG-laden powdered flavouring with oyster sauce. Despite this, proprietor Edwin Yau tells me there is no such thing as a healthy Maggi goreng. “So long as the noodles are instant, nobody can say that it’s healthy.”

While adults across the nation apathetically shout out “tambah pedas” at mamak restaurant cooks across the nation, students have also taken to Maggi goreng as a cheap supper option. Richard, 20, student at Taylor’s University College says he’s aware the dish must not be very good for him. “I only eat Maggi when I’m craving it; it’s usually late at nights. So I don’t feel too bad,” he adds. If there was a healthier alternative of noodle in the market within the same price bracket, would customers opt for it? According to 23-year old student at The One Academy, Heshvin, it would “depend on how it tastes.”

At the same time, clinical dietician Shanaz is quick not to blame our nation’s obesity rate on this dish alone: “If instant noodles are deemed to be unhealthy, then so too are some of the local favourites such as roti canai, fast food burgers, nasi lemak and nasi biryani,” she says. It may be small comfort for Maggi goreng addicts, but the answer is clear: as with all our guilty pleasures, moderation is key. I for one will not be giving up my occasional dose of Maggi goreng. Despite the staggering statistics, we just can’t deny that the curly noodles will always have a special place in our stomachs. 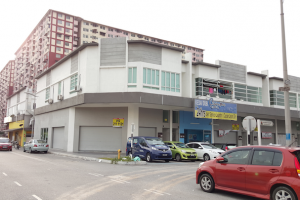