Our food detective, Sue, sets out to discover the city’s culinary secrets and solve our mealtime mysteries. This time, she meets a couple who have been running one of PJ’s most popular hawker stalls for almost 40 years. The first time I visited this char kway teow stall, a feeling of triumph came over me as I felt I had discovered a greasy little secret. Since that first visit five years ago, this has been my favourite spot for char kway teow in the Klang Valley.

This char kway teow stall has no name, despite being around for 38 years. Located in a Chinese coffee shop known as Tai Wah Kopitiam, opposite the iconic PJ Old Town market, the stall unfailingly packs a crowd at lunchtime. It’s not uncommon to see Beemers illegally parked along the narrow street. As you walk towards the shop, the heady stench of fish from the market wafts around your nose but fortunately, the comfortingly smoky balm of kway teow takes over as you near.

Run by an elderly Malaysian Chinese couple since 1974, the stall has seen thousands of kway teow plates being served up over the years. Their version of the dish is remastered to pack lots of chilli. If you like your kway teow spicy, request for ‘tambah cili’ and you’ll be in for a smoky, deeply savoury treat with charcoal undertones. A default plate includes cockles, egg, prawns and lap cheong for the extra flavour. The heat from the chilli tends to inconspicuously creep onto the tongue, which means a cold drink on the side is always wise. Although you have the option of having your kway teow without chilli, the thought is incomprehensible. The 58-year old man of the couple, known as Ah Meng, hails from Penang. Ah Meng has a friendly face, which sometimes scrunches up into a fiercely focused look during peak hours. He started the stall up with his wife when he was 20 and the dynamics of the duo have remained unchanged since then. Ah Meng executes the physical handling of the wok while his wife immaculately prepares the ingredients and recalls customers’ requests (extra chilli, no cockles, egg allergies etc). Stress seems to have no meaning to her, even when slicing scallions in blistering heat. Through all the noisy orders and sizzling of woks, their communication as a couple remains polite and demure. Funny, if I was in the presence of a very hot wok for seven hours straight, I suspect polite and demure is everything I would not be. This seamless harmony between the couple provides for consistently good service at the stall – one of the crucial reasons behind my frequent visits. One of the things I like best here is the couple’s non-fussed attitude when taking customised orders. So many famed stalls lack this sense of making a customer feel at home (the famous kway teow stall at Pulau Tikus comes to mind). I often see regular elderly customers chatting with the couple, staying longer than they should, stretching out their noons indolently with laughs and too much Chinese tea.

This long-lasting synergy impresses me and naturally, I wish to talk to them to about it.  Alas, I am capable of neither Mandarin nor Hokkien (the languages they are familiar with) but the couple’s 25-year old son, Yee Keong, comes to the rescue. A bespectacled young man who runs in and out of the shop to check in on his parents, he interprets for me in between thumbing his iPhone. ‘Some people want chilli or don’t want, some people want to add pork or something, all also my parents can do,’ Yee Keong explains. I ask Yee Keong if his father inherited his recipe from Penang. He tells me that although the Penang backgrounds helped them with the authenticity of the dish, the actual recipe was mastered at this very stall. I assume the trick to the intense char here is the result of scraping portion after portion of kway teow on high heat in a single wok. The dirtier the wok, the tastier the food. Which brings me to my next hypothesis – the older the stall, the more flavoursome the food.

Before I leave (to restrain from ordering a second plate), I ask if I can take a photo of the couple. Ah Meng, a Good Morning towel slung across his shoulders, asks me if he should put a cap on for the photo. ‘No need,’ I reply.  A steady presence in PJ should not submit to such frills, I think before the camera shutter goes off. 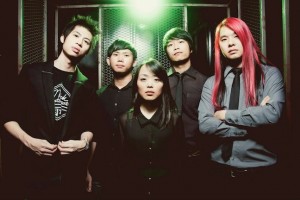