A Malaysian artist's sketchbook of the rally. By Poskod

At any given moment during Bersih 4, a rally-goer might have seen someone taking a photo – of themselves, of a funny sign, of the crowds. But a Malaysian artist who attended her first Bersih rally last weekend decided to record her experiences as sketches instead.

The artist (who wishes to remain anonymous) told Poskod.MY, “My goal of making these sketches on the spot was to capture moments which cameras and video would not, focusing on ordinary people in ordinary places, not a larger movement saddled with assumptions and accusations; and to show another side of large gatherings like this, which wouldn’t be seen in the news or social media.”

The intimate sketches show the more personal side to the rally, beyond the news headlines on numbers and controversies. Each sketch hints at a story and the diversity of the people who took to the streets to be heard.

You can now buy A5 art prints of these sketches here.

People are jubilant on the first day; a photographer clambers up an electrical box to get shots A couple helps each other tie on headbands, Orang Asli representatives bear yellow orchids, a traffic policeman takes a drink Speakers work the crowd at Masjid Jamek; the afternoon heat wears people out; police stand watch at the barricades People pack the public transport stations; a lone cleaner cleans up after them Rain and fatigue take their toll on protesters Buy A5 art prints of these sketches here.

Read this next: The Art of Malaysian Protests Read this next: 5 Protest Signs We Can Rally Around Related: 10 Creative Workshops To Get Your Craft On 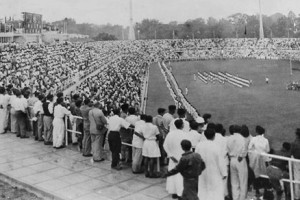