Navshed Navin finds a thriving farm in an unlikely location. By Poskod

If you follow Jalan Ampang far enough you will find yourself in a very different part of KL from the tourist junction where the Twin Towers stand. Among hundred year old shoplots, behind a Buddhist temple, there’s a plot of thriving farmland. The land is filled with plots of vegetable plants and fruit trees – but it is also rooted in mystery.

When I came across this plot recently, I wondered who owned this land. Who operates this farm? How did this happen? And why don’t we have more places like it?

Throughout history, humans have always been dependent on land and access to land. Among many things, it offers a crucial aspect of human survival: agriculture. But the world has changed for many of us.

In a major urban city like Kuala Lumpur, this system of community farming and markets is diminishing.

Living in large cities in an increasingly globalised world, most of us are completely disconnected from the food production chain and industry. Our only real “involvement” is a periodic visit to the supermarket where we’re faced with seemingly endless options of conveniently packed and prepared foods carefully displayed under bright fluorescent lights.

But not so long ago, Malaysians used to eat what grew locally, from community based farms and markets. In a major urban city like Kuala Lumpur, this system of community farming and markets is diminishing.

Farm lands are often far away from the city where land is much cheaper (and not “reserved” for development). Urbanites rarely have access to large enough land to run such operations. But even in rural areas, farm land is a contentious issue. In recent years, farmers have complained about farmland being reclaimed by the state under Ops Gading. That’s why the sight of farmland in the city surprised me so much.

According to a lady who was walking by the farm one day, the land is owned by a lawyer who lives in Canada. She also mentioned something about squatters residing there. To find out more, I went to a nearby market where I heard that some of the families who tend this land sell their produce.

Every morning at six this small community wakes up to a lively market lined along narrow alleyways. Fresh fruit, vegetables and meats, roast duck and pork, Chinese sausages, electronics, and even underwear fill the alleys. Everyone seems to know everyone else here. However, not visible from main roads, non-locals wouldn’t even know this market exists.

I met Sharon and her mother-in-law as they were tending their vegetable stall. We casually sat down and started to talk as they socialised and continued to sell produce throughout our conversation.

Sharon tells me that their family has been using and working on a part of this urban farm for the past five years. According to Sharon, her mother-in-law’s family use to live on that land, but was evicted by MPAJ (Ampang Jaya City Council). In a story echoing the lady I’d spoken to earlier, Sharon explained that the land was being used by landless squatters until about eight years ago when the city council decided to demolish the homes for not having proper authorisations.

However, since the land is privately owned, MPAJ could not determined its fate. Some of those who were displaced later managed to move back into the community and continued their lives. Sharon’s family is one of them. “We use to live there ma! And now we grow fruits and vegetables there.” I asked Sharon if she knew anything about the ownership of the land, and about this mysterious lawyer in Canada. She said as far as she knew, that rumour was true. A man who had moved to Canada had given the community permission to use his legally owned land as they saw fit. She added, “I don’t know if he is a lawyer or what, but I think he is in Canada.”

Sharon explains to me the cooperative nature in which they divide the land. “The farm got three families working on it, each with their own space… but we all decide together how much each family needs or wants.”

So, the families benefit from profiting from the sales of the produce, and the community benefits from getting fresh fruits and vegetables from their backyard, on top of having a beautiful and diverse farm in an urban setting. “Got about 20 different types of fruits and vegetables that grow there,” Sharon tells me.

I then met Mr. Wong, who was trimming some sugar cane shoots by the farm. He tells me he is preparing them to be sold for traditional Chinese medicine, and that they all grow right here on his portion of farmland.

“I lived there for more than 20 years, and they just kicked us out.”

“I only grow sugarcane and bananas. I let the others worry about vegetables,” he tells me jokingly. Mr. Wong, who is now in his seventies, explains to me that he too use to live on that land before the houses were demolished by city council. “I lived there for more than 20 years, and they just kicked us out… now they don’t bother us so long as nobody builds a structure on that land.”

So that’s how this urban farm began. It was the displaced urban squatters who collectively decided to make good use of the land to grow fruit and vegetables.

When contacted, MPAJ told Poskod.MY that they do not have the right to evict people squatting on private property – the most they can do is advise the owners to notify the police. The officer said she was not sure if there have been evictions in the past.

Ampang MP and PKR Wanita Chief Zuraida Kamaruddin told Poskod.MY that in 2008 the state government assisted families living on state land to relocate and provided compensation, but she was not aware of a case involving private land.  “If it’s private land, the owner has right to chase them out. But with these cases, if they come to my attention, I will come and see – there must be a scheme or plan to resettle them somewhere.”

When a city and its communities grow or develop, some people are left behind. Many will become wage workers forced to either rent land (from the winners of the development game), or squat when other means are not available. It all became disturbingly clear to me why we don’t see more urban farms in the city.

As I stood there looking at this patch of greenery filled with fruits and vegetables, I was confronted by the huge role that land – or the lack of it – plays in shaping our communities, and our cities. 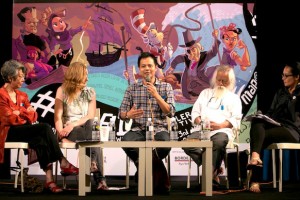 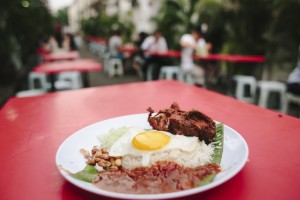 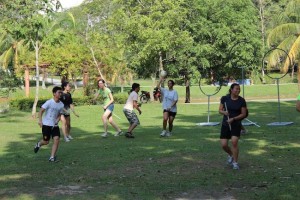